Asteroids are obstacles that appear in several games in the series. They are large pieces of rock that float aimlessly through space and deal damage to Arwings upon contact. Asteroids can be found in several sizes, some as big as an Arwing (their most common size) or even bigger than the Great Fox, though some are much smaller.

Two famous examples of locations containing Asteroids are the Asteroid Belt and Asteroid Field. Planet Sauria's orbit was littered in Asteroids following the separation of the four SpellStone lands.

Some Asteroids are able to be destroyed using the Arwing. These Asteroids can be cleared using Laser firepower or by Smart Bombs, adding towards the score check. This is exceptional to very large asteroids, including two large, hollow tunnelled ones at the Meteo Asteroid Field. Some hostile laser cannons are fitted onto rotating asteroids which are encountered just after the second hollow, tunnelled asteroid. Andross is able to inhale and exhale asteroids through his telekinetic powers as his signature weapon, although these are not worth any hit points, they may leave Supply Rings or even Smart Bombs behind.

Asteroids can normally be cleared using starship Lasers or by Smart Bombs. The Meteo Crusher is specifically designed to clear up messy areas of space where unwanted asteroids and planets block the space lanes. The Star Fox Team's mothership Great Fox, is able to clear pathways in asteroid fields using it's laser cannons. 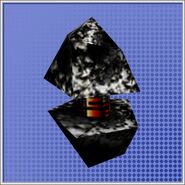 Asteroids with laser cannons fitted on the inside. 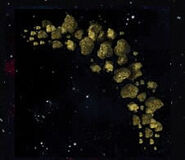 Asteroids represent the Meteo Astroid Field on the map. 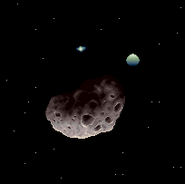 Fox battles Star Wolf at what appears to be the Meteo Asteroid Belt.

Asteroids are scattered around the orbit of Sauria.

The mechanical decoy of Andross and other incarnations are known for using asteroids as weapons.

The Meteo Crusher, its primary function is to clear paths for the Venomian Invasion of Corneria.
Add a photo to this gallery

Retrieved from "https://starfox.fandom.com/wiki/Asteroid?oldid=54345"
Community content is available under CC-BY-SA unless otherwise noted.