Moderate depending on type

Aparoid Missiles are megasized Aparoids that approach the Orbital Gate, functioning as super weapon missiles. Their main function is to smash into an enemy and detonate in order to destroy it. The missiles were designed in three different forms, each larger version becoming more powerful; the smaller types were launched in several waves, the second type had only two, and the largest one went alone. Fending them off is notably similar to the Sector Z mission in Star Fox 64. Their attack pattern is similar to that of a Copperhead Missile.

After the Aparoid Homeworld had been discovered, Cornerian military planners had realized that it would be too far away to travel conventionally there. Additionally, the Aparoid Queen was the entity controlling force between all Aparoid assault groups, who had to be destroyed to end the menace. Federation scientists, led by Beltino Toad, had found that, if an apoptosis program were to be injected into the queen, it could result in the destruction of the aparoids. Since Corneria City was heavily damaged, science personnel were loaded onto the orbital gate to create the program. However, the Aparoids were aware of this, and send hordes of fighters to attack. The raid failed, due to the combined efforts of the Star Fox team and Cornerian fighters. In response to this disruption to their plans, the Aparoids launched missiles at the gate. This attack nearly succeeded, if not for the timely intervention of Star Fox and Star Wolf.

“Just as you seem to be making headway in protecting the orbital gate, the Aparoid forces send a fleet of giant missiles toward the space station from all directions. If one reaches the station, it will hang in space for a very short time then explode, so gun for the biggest threats before pursing the other missiles.”
—Official Star Fox Assault Nintendo Power Player's Guide, pg 80

1. The primary type of megamissiles used was a small, slender, green version that could be launched en masse against a target. It was not heavily shielded, and was easily destroyed by targeting the central spot with charged laser bolts. Peppy implied when the missiles first appeared that the first missile type's concussive power was potent enough to destroy a planet should it connect.

2. The second megamissile variation was larger and had points on it that couldn't be damaged. They are purple and can withstand more than the primary versions before explosion. The purple nose can be exploited by applying the brakes and sending charged shots. Thought difficult to see from a distance, they materialize as soon as they are approached. Each uses "guards" to provide a small shield that will damage Fox's Arwing if he runs into it.

“After you climate the last megamissile, the Aparoid forces outdo themselves by sending in an even more immense missile. At first, it slowly cruises toward the station, but this missile is deviously constructed - you'll need tot move fast.”
—Official Star Fox Assault Nintendo Power Player's Guide, pg 80

3. The third and final was the largest and strongest. Like the second variant, it's purple core is its weak point. At first the only decent weak point is the fuselage at the rear. After destroying the back end of the rocket, it looses mass and then starts to accelerate. The middle section then becomes its new weak point, but only if shots make it past the protective ribs. Once the middle section is abandoned, the rocket will speed up even more, moving its last weak point into the purple nose.

In the Wii U version of the fourth Super Smash Bros., Aparoid Missiles are present in the orbital gate stage, recreating Mission 8 from Star Fox: Assault, acting as hazards and temporary platforms before they charge into the gate. A smash taunt implied that targeting the warhead head-on would prove dangerous to the Arwings, necessitating that they attack from the sides or from behind.

An Aparoid Missile in Super Smash Bros. for Wii U. 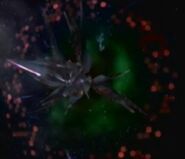 The largest of the missiles exits an aparoid warp portal.