“You'll begin with only the blaster but quickly score the machine gun. Move straight ahead through the Aparoid crawlers, gunning them down as you go, until you see the machine gun. It's great for firing at high speed- useful for when crowds swarm you.”
—

Aparoid Crawlers are the most common, basic Aparoid units, appearing frequently in several Missions during the Aparoid Invasion, situated on the ground forces in "Assault".

It crawls around on all four legs, hence its name. It has two long back legs, and two short front legs. The front legs may be used for grabbing on to or holding things. Its head consists of four pincers and a large turquoise circle, which is most likely an eye.

It can only attack by charging at an enemy. Of course, if Fox touches one, he takes damage. These Aparoids are extremely weak, and can be destroyed by a single blaster shot on any difficulty. Their only real advantage is their vast numbers to overwhelm their enemies. Oftentimes, Aparoid Crawlers are encountered in large swarms. In this situation, the Machine Gun should be used. The powerful Landmaster tank can plough through swarms of Crawlers with great ease, an especially useful way of keeping the Combo Meter full.

Aparoid Crawlers first appeared frequently inside the Katina Outpost in great numbers, notably when Fox set off the emergency alarm and trapping him inside with the aliens. Soon, after taking out two Purple Aparoids, these frequently reappearing and overwhelming numbers of Crawlers and larger Aparoids for a Pilot gave Fox the instinct to summon the Landmaster tank. Crawlers will often swarm in areas where the Hatchers are clinging to, serving as fodder to start making a Combo.

Crawlers are stationed all over the field of Fichina, swarming every area and accompanying the Purple Aparoids and large Spherical Tanks around the Shield Generator areas. The strong Fichina blizzards can often camouflage them, but Radar can pick up their position and their proximity. Crawlers are often deployed in large numbers during the Wing riding section around the Climate control center, acting as fodder to keep the Combo Meter going until the end of the run.

While they pose no threat to the Arwing, Crawlers appear to be working away on the interior of the constructing base. Picking them off while avoiding the mechanical arms can add some extra Hit Points to the score check.

Crawlers again swarm frequently in areas around the Hatchers on the outside field and inside the temples and caves. They are accompanied by the Rolling Aparoids that will take more time to down, thanks to their stronger defensive casings.

Crawlers are all over the streets, buildings and grassy patches of Corneria City. They serve as good measure to keep Combos from being broken, and once again acting as fodder during the Wing riding section on the Wolfen.

Since it is their Homeworld, Crawlers are plentiful outside the buildings and inside, where they swarm along with other ground forces. They are also summoned by the large electrical spheres, and warp into the corridors that try to trap Fox inside with energy barricades when he wanders into them.

An Aparoid Crawler stands up and lets out a cry before attacking. 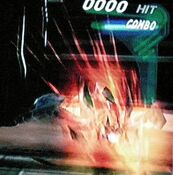 A side view of an Aparoid Crawler.

A close-up of an Aparoid Crawler. 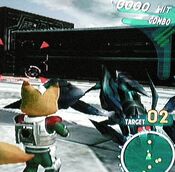 Slippy and Krystal remember the Aparoids.

Falco recalls Pigma being assimilated by the Aparoids.